Not me certainly. I’m busy. This gig is a hobby at best for me. Don’t get me wrong, I love writing SciFi, I just don’t have a lot of time to do it.
But I have been writing at least twice a week for the past several months.

Some of it is pretty good.

Some of it is just ok.

Some of it is complete and total garbage.
But now it’s out and can either be fixed or scrapped.

How often do you write?

If it isn’t at least once a week, try that out. Shoot for more though. I find that the more I write, the more I have that can be good, and can be turned into something a reader will want. I could care less how many books I sell, I just want people to enjoy what I write. I wrote a novel, and I’ve had some mixed reviews on it so far. I’ve also written a non-fiction Christian book, Presbybapticostalism, and I have only heard positive feedback.

But I sent time writing those books. I had to spend lots of time writing to get them both out. If one tanks, oh well. The other one is helping a lot of people.
So how much are you writing? Are you finishing that novel? Are you working on a screenplay? How many songs have you written in the past month?

Well then you need to write some more.

Batman and Superman are very different characters but they’re both iconic and elemental. Finding the right story for them both is the key.
Christopher Nolan
So a few weeks ago we talked a little about villains. Now let’s talk about heroes.
What is a hero?
• the chief male character in a book, play, or movie, who is typically identified with good qualities, and with whom the reader is expected to sympathize.
• (in mythology and folklore) a person of superhuman qualities and often semidivine origin, in particular one of those whose exploits and dealings with the gods were the subject of ancient Greek myths and legends.
(Taken from Apple’s dictionary)
And antihero?
a central character in a story, movie, or drama who lacks conventional heroic attributes. (Taken from Apple’s dictionary)
So which one is going to be in your story?
I love the Superman/Batman dynamic. Batman is shady, and often does things that Superman finds detestable. Like having contingency plans for all of his Justice League teammates. He wears black and grey.
Superman on the other hand is labeled a ‘boy scout’. He always does the ‘right thing’ and stands for being righteous. He wears bright colors.
So which one is your hero?
Obviously Superman sometimes does shady things, and Batman can find himself operating in the daytime. Our heroes will cross stereotypical boundaries as well. But I think what I’m really asking is ‘what does your story require’?
If your story is about a post apocalyptic world where people kill each other all the time, I’m thinking antihero.
If your story is about a cybernetic future where everything is run by an evil public figure, I’m thinking hero.
Of course it could go either way.
But what is your story calling for?
1. Know your story
I recently finished writing a novel, and my protagonist is very much a hero. He’s a boy scout, he always does what’s right, he calculates every move to be a good one. I felt my story called for that. He’s up against an evil dictator who wants to take over the world. What does your story need? Does it need a good guy who will fight to the end and be true blue? Or does it need someone who’s not afraid to get rid of the enemy for the greater good? If you know your story well enough, you will know who your protagonist needs to be.
2. Supporting cast
Supporting cast is vital to who your protagonist is. If he’s an antihero, he needs the constant voice of reason from someone who would never do what he does. On the other hand, a hero often needs the situation put into perspective to do something he wouldn’t normally do. Back to my novel, I know you’re sick of hearing about it already, my hero has a brother who is a little more maverick than he is. This leads to confrontations about certain situations and helps to drive the story along. But without that conflict, my hero would just be another cookie cutter hero saying, “Just doing my job citizen.”
3. Villain
How bad is your bad guy? Is he maliciously evil? Somewhat evil? Maybe he really isn’t that evil? Figuring out who your villain is will certainly inform who your hero needs to be. It could even lead to a twist ending, like a hero turning into an antihero…
Just some food for thought. These are things I think about. I hope they help you in your writing.
“If the boy and girl walk off into the sunset hand-in-hand in the last scene, it adds 10 million to the box office.”
George Lucas
He’s right.
And it’s lame.
I get so tired of happy endings; they disgust me.
That’s why I love short stories. And not only reading them, but writing them too.
Edgar Allen Poe was the absolute master of short stories. When I write them, I always keep ‘The Tell-Tale Heart’ in the back of my mind. It is one of the creepiest stories in the history of writing.
Which brings me to my first point.
1. Set the mood
I’m in the process of compiling and editing some short stories I’ve written and one thing ties them together: mood. One of them is suspenseful. One is scary. One is ridiculous and funny. But they all have a set mood. Your story may not have a strong plot, but that’s ok. Because it’s about the mood
2. Use your characters
Short stories are not long. Thus the short. I’m a genius (lol). But you don’t have the room to play with prose (like in a novel). So use your characters to drive the story and ultimately the mood. Dialogue is a good way to drive comedy. Monologue fear.
3. Don’t worry about word count
A short story is pretty much defined as under 7500 words. That’s a lot of words. When you get over that many words you have gone on your way to a novella. Don’t write a novella. Write a SHORT story. It doesn’t have to be long. Remember: it’s about the mood. Moods come and go. You don’t get in moods for days or weeks. You get in moods for short periods of time. So make the story short. I shoot for around 2000 words. Just enough to get something going then yank it away. Because it’s about the mood.
Don’t put the idea of short stories away. You have to write everyday. Right? How many days have you sat in front of Scrivener and not been able to work on your novel? If you’re like me, a lot. So write a short story instead. Who knows? Maybe you’ll write enough to compile an anthology. That’s what I’m working on.
Tell me about your short stories.
My cousin Jeff shared some of his ideas with me at our family reunion and I loved them. What are your ideas? I promise I won’t steal them.

Who is the baddest bad guyever?

The answer of course is Satan.

Yeah. I went there.

But seriously though, let’s talk about bad guys in the Bible. There are mass murderers, hit men, hookers, warlords, sorcerers…the list goes on and on.

So why not tap into that resource?

I’m a pastor, I read the Bible all the time and have to talk about these guys, along with good guys and of course God, so they’re more readily in my mind. And no matter what you believe about the Bible, you can definitely use it to model characters.

We all know that everyone’s hero is a type of Jesus, but what if your villain was say…Herod the Great. An ego maniacal nut job who thought he was entitled to the same worship as God. These traveling guys tell him that the King of the Jews was born, Jesus. Herod is not happy with this and orders that all boys under the age of two are to be killed. Because there can’t be a King of the Jews. Herod is king of the Jews.

And Herod is not even in the Bible until the 40th book! There are plenty before and after him.

So try this on.

Steps to modeling a Biblical villain:

This is a given. If you’re going to model something you have to know what it is right? If you try to make a villain model someone in the Bible, and give interviews and all kinds of sound bites saying you did, there better be at least a slight resemblence of the original story. Otherwise, you’re just going to look completely stupid.

2. Pick a villain. Any villain.

If you read the whole Bible, there are plenty of villains to choose from. (Just make sure to see number one on this list.) Let’s face it: everything’s been done. So using a resource is not bad. You can use comic books too as far as this idea goes. I’m just putting a very exhaustive resource forward.

3. Have scenarios that model their actions.

Remember Herod? And killing the babies so he would be the only king? Even though he died pretty soon after that…Anyway. What if you had a villain who was an ace fighter pilot? Have him order the hits on a bunch of other ace pilots so only he will remain.

I hope you will at least consider this. And number 1 is in effect if you are strictly modeling the Biblical account. (If you just want an ego maniacal maniac, read Batman and model the Joker.)

But seriously think about it. There are thousands and thousands of words featuring villains in the Bible. Go show the world why they’re so evil. And write a great book while you’re at it.

“Science fiction at its best should be crazy and dangerous, not sane and safe.”
― Paul Di Filippo, How To Write Science Fiction

When you read Science Fiction, what is it you want?

Do you want a sprawling galaxy like Star Trek where an unlimited number of species are working together to fight off the uh what three evil species?

Or do you like Firefly, where they fly around a Solar System dodging the authorities and creepy space zombie cannibals?

And I think I like them all because they’re dangerous and crazy.

Take Trek for example. People exploring the galaxy and seeking out new life forms. Have you watched TOS? They get into trouble all the time because they can’t just stay on the Enterprise.

Firefly? Shootouts, and mobsters, and trains, and gimongous Alliance spaceships that dwarf Serenity.

Ghost in the Shell? They live in robot bodies and shoot at everything. (After they talk for five episodes straight of course.)

Lots of danger. Lots of action. Lots of insanity.

In my short story called “Rain on the Roof”, which will be releasing soon, I get a little crazy and dangerous. There’s a guy stuck in a wal-mart-esque store while it’s pouring down rain outside and no one can go anywhere. It’s loosely based on real life experiences…

But it’s OK to be crazy! If it’s safe, it probably isn’tfiction is it? We read books to escape reality, not to do all of the things we already do. No, we want to fly space ships and shoot lasers and pick up strange alien parasites that attach to our faces and..and… 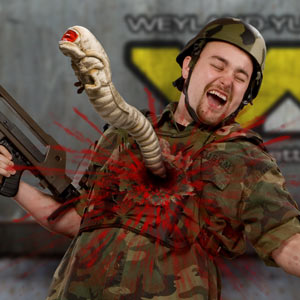 Sorry I got a little carried away.

What are you doing in your book that’s crazy?

Robots that have become sentient?