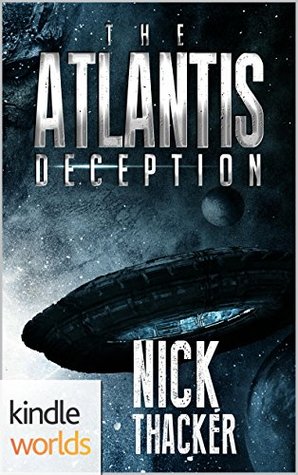 A. G. Riddle’s Atlantis books have become somewhat of a phenomenon recently. So much so, that other authors have been asked to write novels in the Atlantis universe. Nick Thacker has thrown his hat into the ring, and has come out with one of the best reads I’ve had in a while. Read on for a

In the Atlantis universe, humanity has spread out to the stars, and started cataloguing the various alien species it has encountered. They keep these species in ships called ‘arcologies’ that house them in environments similar to their homewards. This story takes place on one of the last of these ‘arcs’ and begins with a ship in turmoil. The expedition has been recalled due to a lack of funding, and the scientists on board are not really all that happy about it.

This puts a rift between several of the characters, and irritates some of them beyond imaginable belief. If I had to really come down on any aspect of this book, it would be some of the characters incessant whining about having to leave the expedition.

All of this is of course escalated when they get locked into the center of the ship together and have to find a way to escape.

Honestly this is a great read. I finished it in a little over four hours tops. It’s short enough to read through quickly, yet packed enough to leave you wanting more when it ends. There are some fairly decent plot twists and some otherwise surprising elements of the ship that will have you guessing the whole time.

Go get it here!

Holy crap new Star Wars trailer!! I love it. If you haven’t seen it yet, here you go…

Wow. Just wow. If Abrams messes this up I will be royally disappointed. Because these trailers look and sound so cool. Can’t wait til Christmas!

So get ready by reading about an adventure on a space ship!